Flourishing in Faith: Theology Encountering Positive Psychology, edited by Gillies Ambler, Matthew P. Anstey, Theo D. McCall and Mathew A. White, is a compilation of essays from various authors which came about as a result of its namesake conference in 2014. This conference, and the subsequent book, had one purpose: “to explore the relationship between the Christian tradition and the emerging field of positive psychology, a branch of psychology that conducts scientific inquiry into factors that help individuals, communities and organizations to thrive.” (pp. xix – xx) It is no surprise, then, that theology, as a discipline which is fundamentally concerned with the reality of true human existence in the light of the reality of God (and therefore their flourishing) would have some overlap with the empirical study of psychological virtues which promote this flourishing. 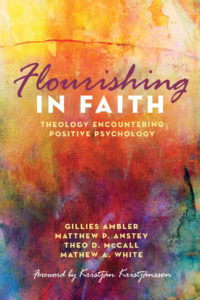 The book is structured into four sections:

Chapter 1 & 2 – Authored by Professor Ellen T. Charry and entitled Positive Psychology and Christian Theology: An Exchange of Gifts and Flourishing and Languishing: A Testimony from the Psalms respectively, these chapters serve to set the context of the text. Prof. Charry’s central argument is that there should be a mutual reciprocity of openness towards one another and that both have gifts to offer to the other. Positive Psychology can help Christian Theology in its cultivating an attitude of growth towards positive character strengths and abilities, and in pursuing positive experiences (pg. 19). Conversely, in in performing a case study of various Psalms Charry shows how Theology, in its focus on self-failure and weakness, can foster self-introspection and analysis which ultimately leads to the restoration of relationships, and thus lead to human flourishing (pg. 19).

Chapter 3 – Authored by Associate Professor Mathew A. White, entitled An Introduction to Positive Psychology, Positive Education and Wellbeing, this chapter seeks to define what positive psychology is in its historical and scientific context, how it is misunderstood and misrepresented, and how it interacts with school education and the wellbeing of students. Simply put, positive psychology “is the study of ‘the conditions and processes that contribute to the flourishing or optimal functioning of people, groups and institutions.’” (pg. 39) The results of this sort of empirical investigation is tied to understanding the wellbeing of people, and has been successfully implemented in education programs, promoting the flourishing of students.

Chapter 4 – Authored by The Revd. Canon Dr Mathew P. Anstey entitled, “And God Saw it was Good”: The Creation of Wellbeing and the Wellbeing of Creation, this chapter provides a poetic retelling of the Genesis 1 creation story, highlighting the original Hebrew’s personal and intimate lexical nature, in order to argue for God’s concern for wellbeing. It is from this story that a positive anthropology is built in the light of a positive theology of God – a God who intimately envisions and creates wellbeing in and for his creation.

Chapter 5 – Authored by The Right Rev’d Dr Tim Harris, entitled Shalom, Gospel and the Mission of God, this chapter discusses, from a Biblical Theology perspective, the grand narrative texture of Shalom – the God ordained picture of wholeness, orderliness and peace – that traces itself all through the Bible. From creation to new creation there is a consistent theme of the flourishing of God’s creation under the banner of Shalom highlighting how human flourishing is a central theme of the Biblical story.

Chapter 6 – Authored by Assoc. Prof. White entitled Mary-Theotókos: Fulfilment of God’s Grace and Embodiment of Virtues – A Strengths-Based Reading, this chapter is a reading of the Magnificat which attempts to gain a deeper understanding and appreciation of her as Textbooks by focusing on her psychological character strengths and virtues as defined by psychologists Christopher Peterson and Martin E.G. Seligman. In doing so he reveals a “richer interpretation of the relationship between God the father, Mary, and her son”. (pg. 94)

Chapter 7 – Authored by The Revd. Dr Theo D. McCall, entitled Drawn into the Inner Life of the Trinity: A Dialogue between Theology and Positive Psychology, in this chapter, The Rev’d Dr McCall focuses upon the salvific process of being ultimately drawn into intimate participation within the Trinitarian life of God, which though initially begun by God, requires the active participation of the human individual with the its calling. In this process, positive psychology, though not a wholesale replacement, can be seen as a positive tool within this program of “self-transcendence” (pg. 109)

Chapter 8 – Authored by Carla and Andrew Ford, entitled Gratitude: A Theological and Psychological dialogue, this chapter focuses on the multifaceted nature of gratitude from both the perspective of theology and positive psychology, revealing how it is a “central theme within both fields”, and is a “complex concept with many nuanced understandings and elements.” It is shown that “Theology contributes to a richer understanding of gratitude, whilst Positive Psychology equips believers with practical tools to live out the Christian faith.” (pg. 124)

Chapter 9 – Authored by The Revd. Dr J. Harold Ellens, entitled Sailing Close to the Wind, this chapter discusses the nature of numinous experiences from the perspective of both theology and positive psychology. Are paranormal/religious experiences solely within the confines of the scientific or mundane, or do they come from some self-transcending source? He concludes effectively claiming the reality of both: that these very well may be mundane, and therefore must be further open to the scientific discoveries in this realm, whilst recognising God’s providence over the mundane.

Chapter 10 – Authored by The Rev’d Dr Gillies Ambler, entitled Grief Experiences: Potential Catalyst for Post-traumatic Growth and Wellbeing, in this chapter The Revd. Dr Ambler provides an extended reflection on the nature of grief borrowing  heavily from his thesis and self-published book on the issue – in particular he focuses on his auto-ethnographic research of his experience of grief after the death of his first wife, which he then compares with the experience of grief after the subsequent death of his son. In it he reveals the transition from brokenness to wellbeing, and how post-traumatic growth occurred in his own life, laying the foundation for qualitative methods which can provide a way forward for positive psychology in promoting human flourishing through times of intense grief.

Chapter 11– Constitutes not a formal essay, but rather, an interview between Professor Shane Clifton and The Rev’d Canon Dr Anstey, entitled Flourishing in a Broken Body: An Interview with Professor Shane Clifton, in this chapter, The Rev’d Canon Dr Anstey interviews Prof. Clifton with respect to his own experience as a quadriplegic Christian Theologian. Therein he discusses the interaction between positive psychology and theology (specifically focusing upon the Thomistic/Aristotelian virtue tradition) and positive psychology and his own personal experience.

Chapter 12 – Authored by The Revd. Lisa Spargo, entitled “I Came that You May Have Life, and Have it Abundantly”: Drawing on the Resources of Faith to Help School Communities Flourish, in this chapter, The Rev’d Spargo investigates the potential for interaction between pastoral care chaplaincy programs within schools and positive psychology programs and how, at their core, both work towards the same goal. In her words, “positive psychology and chaplaincy need not be seen as unrelated, and certainly not as opponents, but rather as allies in the work of student pastoral care.” (pg. 185)

Chapter 13 – Authored by James Nelson entitled, Character Strengths and Christian Wisdom, in this chapter Nelson lays the foundation for providing character formation within school education and provides and accompanying example program for inculcating character strengths within the context of a school year.

Chapter 14 – Authored by The Rev’d Dr James Patrick Burns, Dr Jameela Conway-Turner, Christopher Staysniak, Melaine Malcolm, Dr Matthew T. McGonagle. Understanding the Role of Hope and Faith in Flourishing: Piloting a Measure of Christian Hope, in this chapter the authors seek to establish a qualitative method by which the secular and Christian concepts of hope can be distinguished from one another, using “a self-report measure that conceptualises hope related to self, hopefulness in others and hopefulness in God or the transcendent, which roughly correlate to three constructs of hopefulness regarding temporal, humanistic and Christian themes.” (pg. 204)

Overall the text is an enjoyable and informative read. It has a pleasant mixture of varying perspectives – theological, biblical and practical – reflecting the variegated expertise of the authors involved in writing this text. Each author is erudite and eloquent in their own way, and invested in seeing human flourishing and how this can be approached from their specific sub-discipline. I was struck by the clarity at which the concepts were put forth by each of the authors and at no point did I feel that the arguments were convoluted, aimless nor overwhelming due to a dearth of lucidity in the individual expressions of each writer. It, overall, makes for compelling reading not only in its subject matter but in variety of clear and interesting voices. As one who has no formal training in Psychology, it made for an engaging and rather easy read.

There are a few minor issues with the text, however. Though the original conference was originally intended to have an equal dialogue between theologians and those involved in the field of positive psychology, it was ultimately skewed in the former’s direction, having primarily theological contributions. As such, the resultant work is primarily a theological look at positive psychology. I would have liked to have had more input from those associated with studies in positive psychology so that there could have been a more penetrating discussion between the interface between both fields rather than having been hegemonised by a discipline with which I already owe allegiance to. This having been said, it is not as if the editors and authors ignore this reality and attempt to deceive the reader in fact they make note of this fact in their very introduction revealing that they are largely self-aware of this limitation.

I would have also have liked to have seen more comment on the fundamental inconsistencies that may lay between theology and positive psychology in an attempt to dig deep to the source of their foundational issues; after all, an open and honest dialogue between two people or fields of academic inquiry is only that if it doesn’t skirt past the reality of their differences. There seems to be the beginnings of this sort of a discussion in Chapter 1 and 11, but it never goes beyond this. However, as already having been mentioned, it seems that the text is more interested in finding grounds of commonality – a bridge between the two disciplines – rather than pointing out the points where there are insurmountable obstacles. This omission, then, could simply be considered as being outside of the scope of the present text (and is something which I suppose can be explored in a further volume).

These critiques, ultimately, are rather minor concerns – nitpicks, if you will – which say more about the preferences of this author, rather than of the internal integrity and quality of the text. It doesn’t compromise what is otherwise an enjoyable and insightful read into both the modern landscape of psychological research and how the historic Christian tradition can and should interact with it. It is, self-admittedly, the beginning of a dialogue between two different fields, opening up and broadening the horizon for potential future investigation. It is the beginning of a process in noticing the overlaps between Christian thought about God and empirical investigation into the flourishing of the self, and in light of this purpose, the editors and contributors of this volume execute this task admirably.

Interested in attending the Book Launch for Flourishing in Faith on Sunday the 3/12? Check out our Eventbrite page and sign up before the 1/12!

Copies of the book go on sale as of the 4/12. Contact our librarian Ros Devenish to order a copy.