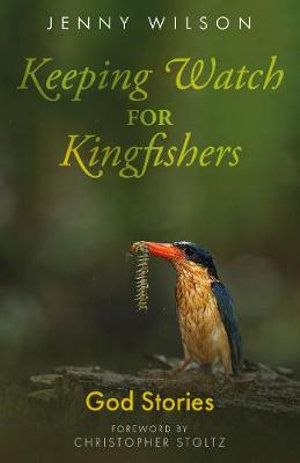 The below is transcript of a sermon entitled Keep Lighting Candles preached by SBC Homiletics lecturer, The Rev’d Canon Jenny Wilson.

It has been taken from her newly released book Keeping Watch for Kingfishers: God Stories which is an anthology of selected sermons from her time in ministry.

In a speech during his time as President, after one of the many mass shootings in America, Barack Obama looked at the cameras and spoke almost in despair asking why he found himself speaking to his country about mass carnage again and again, saying he did not want to do that ever again. I could not find the text of that speech but his words to the press after the violence in Oregon in 2015 had a similar theme. “Somehow this has become routine.” He said. “The reporting is routine, my response here at this podium ends up being routine, conversation after the aftermath of it… we have become numb to this.” Preachers and people of faith across the globe might be asking the same question. Are our words, are our prayers, becoming routine? I could search through my files and “copy and paste” to write this sermon. “A man walked into a Lindt Cafe in Sydney and took hostage a group of innocent women and men and killed two of them.”  December 2014. “A man walked into a Brussels airport and, blowing himself up, kill scores of people and injured many more” April 2016.

And now “a man walked into a Manchester concert venue.” A man walked into a Manchester concert venue and, blowing himself up, killed scores of innocent human beings and injured many more. And mothers and fathers across Britain and further afield leapt onto their phones to check that their loved one, their daughter, their son, was safe. I know that, because I was one of those mothers. We were saying Morning Prayer at clergy conference, and when we prayed for the victims of an attack in England and the city was not named, I jumped onto my phone to check that my daughter who is living in Exeter was safe. Only very quickly, after the relief, the guilt sets in because we know that for another mother, for many mothers and fathers, their loved ones are not safe anymore. Like Barack Obama we may plead to God, how many more and wonder if there is anything to say, and wonder if we might not better sit in silence in the face of this.

Only preachers, at least, cannot sit in silence for this awful violence, and the love and the anger and the guilt and the feeling of utter helplessness that follows from such violence, are held. Held in a story. And our hope lies in remembering that story.

We know it, don’t we? It goes a little like this:

A man walks into Jerusalem. Well he rides in, actually, doesn’t he? A man rides into Jerusalem on a donkey, and the crowd waves palm branches and cries hosannas to herald his coming. But they got more than they bargained for, didn’t they? He walks into the temple, and rages at those selling things there, that they have made his Father’s house a robbers’ den. That man lived and healed and loved and died out of his love for the one he called Abba, his Father, God. The relationship of closeness with God sustained him and gave him such courage and clarity about what he was to do. He gave many of those who he encountered freedom, but, when the religious leaders betrayed that God, he confronted them with their betrayal, with their sin.

When the time for the Passover comes, this man, Jesus, eats supper with his disciples and tells them what is going to happen and, when Peter says he will go with him, he says that he cannot go with him. And then, in John’s Gospel, from which we heard read this morning, Jesus speaks for three chapters about how the disciples must not let their hearts be troubled, and he speaks about his life of closeness to his Father, and he speaks about how the disciples are to abide in that love, how we are to abide in that love.

And then Jesus prays. The whole of chapter 17 of the Gospel according to St John shows Jesus praying to his Father before he goes to his passion and death. Our Gospel reading this morning is part of that prayer. His prayer to God is for his disciples. Jesus’ prayer shows his concern, not for himself, but for his disciples, and so for us, that we may know eternal life, life in God. He says:

In John’s Gospel, the glory is about Jesus’ crucifixion and resurrection. Jesus knows what he is to face. And his great longing, his profound prayer, is that those he loves will be caught up in the life and love of God, might know eternal life, as he names it. This is not about life going on for all time in our time and place. But it is about a life that even death will not bring to an end. It is about a life of depth, a life held in God, a life struggling to know that it is held in God, a life of the wonder and challenge of prayer. Jesus prays, really, that we might pray.

And then he walked into the trap that hatred and sin set for him and he silently endured his trial and passion and died loving and forgiving those who put him to death. And God did glorify him, to use the language of John’s Gospel, God set him free from death and in his resurrection he encountered and forgave and set free from fear those disciples who had cowered and run away when he needed them most.

And so here we are wondering about how it is that we might pray for those caught up in violence in Manchester in England and for those killed by suicide bombers in Djakarta just a day later and for all the other things on our hearts. We might well want to say to God what the disciples said to Jesus in our reading from the first chapter of the Acts of the Apostles this morning: the disciples were gathered with the resurrected Jesus and they said to him, “Lord, is this the time when you will restore the kingdom to Israel?” (Acts 1:6). In other words, are you going to sort everything out now? In Barack Obama’s words, we don’t ever want to have to pray about this violence again, will you please sort it all out now? Jesus did not answer the disciples’ question. He simply left them in the strange event that we call the Ascension telling them to wait for the Holy Spirit. It seems that we are to try to find ways to keep on praying, to keep on trying to glimpse what it is to live in this eternal life that Jesus begs God to give us. It seems that we are to keep on praying.

A number of years ago I lit a candle each week for a close friend who was in a time of terrible struggle. I was in training at St Chad’s in Fullarton, and I told the priest about my friend and about my lighting candles to pray for them. “What should I do?” I said, as it seemed that nothing was doing any good for my friend. “What else can I do?” … “Keep lighting candles,” he said. “Just keep lighting candles.”

Each week in our Cathedral as part of Choral Evensong on Wednesday nights at 5.30 p.m., we light candles for peace in the world. Last week we prayed the prayer written by the Church of England for the victims of the attack in Manchester, and we shall pray that prayer again this week.

A man walked into our Cathedral during that candle lighting service of Choral Evensong. The service was well under way, and the man joined us. But during the organ voluntary at the end of the service, the man who had walked into our Cathedral came forward and lit a candle, and placed his candle in the bowl with the many other lighted candles, and he took a photo of the bowl and the prayer for the Manchester victims. He came over to me at the side door of our Cathedral, and he shook my hand, and he said this. “I am the director of the Cathedral in Manchester. I will send this photo to my Dean. Please tell your Dean. Thank you for doing this.”

Week by week, during school term, we gather on Wednesday evenings for Choral Evensong, and we light candles for peace. We would love any who wish to join us perhaps once a month or once in a while. Week by week we bring our helplessness and our anger and our guilt and our love for our fellow human beings across the world who are caught up in acts of violence. We might care for Manchester, because there is something there or someone there or a culture there that we can relate to. Our hearts are not as big as God’s heart, after all, the God who loves and gathers in all who die in acts of violence and grieves for the world in which such violence takes place. God understands that our hearts are a little smaller than God’s heart, though it is good if we remember that, I guess. It is good that we remember that we cannot care for all who need care.

“The reporting is routine, my response here at this podium has been routine, conversation after the aftermath of it … we have become numb to this” Barack Obama said in response to yet another act of senseless violence in America in the time of his presidency as he pleaded with his people to consider changing the gun laws in that country. Over and over again we gather in this cathedral to pray in the wake of senseless violence and the awful grief and fear it engenders. Strangely this does seem to be about a routine, perhaps we might call it a pattern, a pattern of prayer.

We struggle to pray, to dwell in a routine utterly different from the one Barack Obama grieved over, a routine or pattern grounded in the great love of God. A pattern we see in the life and death and resurrection of Christ. The life of prayer. The eternal life of prayer.

If you’d like to keep up to date with what’s happening here at St Barnabas College, please fill in your name and email below, and click ‘submit’.

Encouraging people to know and love God through learning in community