I am writing to inform you that the Council of St Barnabas Council has accepted the resignation of The Principal, The Rev’d Canon Dr Matthew Anstey. 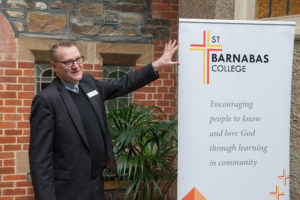 After a period of discernment, Matthew has decided to pursue new opportunities that offer a greater focus on academic research and writing. As part of this, Matthew will take up a more formal role with the Public and Contextual Theology Strategic Research Centre of Charles Sturt University as a Research Fellow, under the leadership of The Rt Rev’d Professor Stephen Pickard. This ongoing role with CSU will allow Matthew to continue supervising his current honours and doctoral students enrolled at St Barnabas College, an academic task he greatly enjoys.

I am delighted furthermore that Matthew and his family will remain in Adelaide while he pursues these new opportunities, as he is keen to remain actively involved with the Diocese and the national Anglican church. Hence I intend to license Matthew to the office of Honorary Associate Priest to the Cathedral and we look forward to his continued ministry amongst us.

Since commencing in 2010, Matthew has taken the College from just eight to about fifty students. He has built an engaged, cohesive staff with a dozen team members, from just two when he commenced. The College now boasts an ecumenical faculty of 18 adjuncts, from Baptist, Anglican, Uniting, Salvation Army, and Pentecostal churches.

In 2014 Matthew successfully negotiated the College’s receipt of the donation of Clive Rodger’s private theological library, totalling about 75,000 books and valued at over three million dollars. He has overseen the rebranding and strategic repositioning of the College, increasing its appeal to a broader cross-section of the Christian church. In addition, Matthew has arranged a number of outstanding international scholars to visit the College including Miroslav Volf, Ellen Charry, Richard Middleton, Stephen Barton, and James Alison. All have spoken highly of his generous hospitality, intellectual vision, and passion for theological education.

I am also very pleased to announce that The Rev’d Dr Don Owers AM will take up the role of Acting Principal, and The Rev’d Dr Cathy Thomson as Acting Director of Learning and Teaching. Dr Owers was previously Principal of Tabor College of Higher Education and currently chairs the Council of Private Higher Education. Dr Thomson, who returned to Adelaide last year, was previously Academic Dean of St Francis Theological College, Brisbane.

We are blessed to have such experienced theological educators serve the College during this time of transition. Please uphold the College community in prayer as we seek to recruit a new Principal and embark on a new season in the life of St Barnabas College.